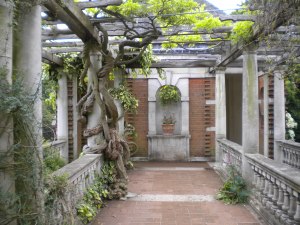 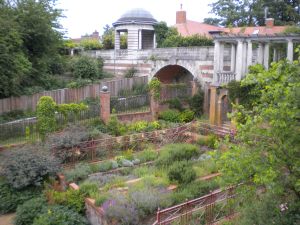 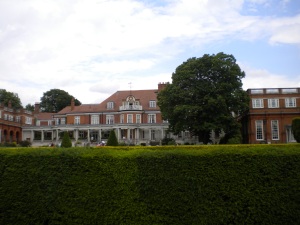 Now part of Hampstead Heath , this site was formerly part of the gardens of Hill House. The original house was built in 1807 and in the C19th was owned by the Quaker banking family of Hoare until 1896 when Sir Samuel Hoare sold the property to George Fisher, partner in a successful firm of auctioneers. Fisher rebuilt the house and moved here with his family. Set in 5 acres of parkland and gardens, there were apparently ponies for the children and a goat-chaise. A blue plaque was erected to Fisher’s son Sir Ronald Aylmer Fisher, statistician and geneticist, who lived here as a child until 1904. The house and its gardens were then successively modified by the philanthropist and soap manufacturer William Hesketh Lever. Lever, who was created Baron in 1917 and in 1922 became Viscount Leverhulme, owned the property from 1904 until his death in 1925. He renamed the house The Hill and the additions he made to it included north and south wings to the garden front in c.1905 designed by architects Grayson and Ould, who also designed a terrace along the garden front to which Thomas Mawson (1861-1933) added an Ionic Verandah in c.1910. Other additions to the house included a library wing (1913/14), a ballroom beneath the terrace (1923) and extension of the south wing (1924/5), the latter by Mawson with T H Mawson & Sons.

The gardens were laid out for Lever in 3 phases, the first scheme following his purchase of Hill House in 1904, a second scheme following purchase of Heath Lodge to the north-west in 1911, and a third after he purchased another property, Cedar Lawn to the south, in 1914. During WWI Cedar Lawn was used as a hospital and subsequently as a maternity hospital. The first two garden schemes were designed by Thomas Mawson who had previously worked for Lever in Lancashire. The early C19th gardens of Hill House had been laid out on sloping ground to the west of the house and consisted of a large lawn with scattered trees, boundary shrubs and walks, with a double shrubbery on the west side and probably kitchen gardens between; one walk led onto Hampstead Heath. Mawson levelled the site into terraces, with terrace gardens in front of the house, a level lawn and a Pergola created around the west and south sides of the garden in 1906. Between the Pergola and south-west boundary were kitchen gardens. After purchasing Heath Lodge in 1911 Lever demolished the house in order to extend his gardens. The Pergola was continued across a bridge over the public road that separated the two properties and led to a circular Garden Temple; a further stretch of the Pergola led to a Belvedere at the western end, which overlooked Hampstead Heath and the former gardens of Heath Lodge. A Pergola Temple replaced a conservatory on the west of the original Pergola; service buildings were erected to the east of the new land and the 2-acre garden was incorporated into Lever’s gardens. In 1922 Lever demolished Cedar Lawn and again extended the Pergola and gardens.

After Lord Leverhulme’s death in 1925 The Hill property was acquired in 1926 by shipowner Andrew Weir, first Baron Inverforth, who left it on his death in 1955 to Manor House Hospital, when it was renamed Inverforth House in his memory. The property was divided in 1960 when the LCC purchased the western part of the site and the north-western part of the Pergola, which with the gardens were restored and opened to the public in 1963, renamed The Hill Garden. The southern part of the Pergola was publicly access in 1971 but later closed as unsafe. In 1991 the Hospital offered their part of the Pergola to the Corporation of London, who had taken over ownership of the north-western part of The Hill Garden in 1989 after the abolition of the GLC in 1986. In 1995 the Corporation restored the Pergola and laid out further formal gardens to the west on the site of the former kitchen gardens and glasshouses. These have a formal arrangement of trees, large planted pots, and a geometric arrangement of beds planted with herbaceous plants and shrubs, herbs and ornamental vegetable. Inverforth House and its gardens (q.v.) was sold to developers in the 1990s for private residences. There are excellent views towards the house and over Hampstead Heath.